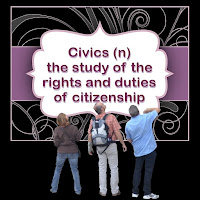 I launched Civics Online Resource Community (CORC) https://civicsonlineresourcecommunity.org in 2018, a website that “reintroduces visitors to the power of Civics so that citizens can better understand their rights and duties of citizenship to become more informed about how government work, more encouraged to get involved in the community, and vote like their life depends on it. You relearn the tenets of citizenship, put them into action, and share what you learn with fellow citizens.”

“Civics is a subject understudied in junior high and high school, which translates into how underappreciated it is in society today. Understanding Civics is essential to understanding that as citizens, we have a duty to know what is happening in government and be vigilant in knowing how governmental agencies and departments are managed, regardless of the political party in power.

The framers’ belief in self-government is shown in the first three words of the United States Constitution, "We the people." C.O.R.C. is an online community of civic-minded citizens committed to understanding how government work and holding government accountable when it is not working as it should; citizens who vote as an act of duty; and citizens serving the community.”

Contents include subjects regarding:


No matter what your political leaning is, as citizen, you have a duty to know how government work and to hold government accountable when it is not functioning in ways that best serve, we the people.

“Let us not seek the Republican answer or the Democratic answer, but the right answer. Let us not seek to fix blame for the past. Let us accept our own responsibility for the future.” John F. Kennedy, 35th President of The United States

“I hope to impress upon visitors to this site that because government is the people, for the people, and by the people, as citizens we have a duty to make sure our constitutional rights are not trampled on, not bargained away or redefined under the guise of other legislation, no matter whether government is local, federal, or state and no matter which political party is in power. That takes understanding how all of government work, and once you know, you will be able to spot when governmental agencies and departments are not working as they should.

“We have hundreds of governmental agencies and departments that function to serve we the people, and Congress is charged with oversight of them. The Department of Transportation function is to ensure our roads, bridges, and tunnels are safe to travel on. The Environmental Protection Agency is charged with making sure our air is safe to breathe and water, clean to drink. The Food and Drug Administration regulate the following industries: prescription and over the counter drugs, food, cosmetics, medical devices, animal and veterinary, tobacco products, radiation emitting products, vaccines, blood, and biologics.